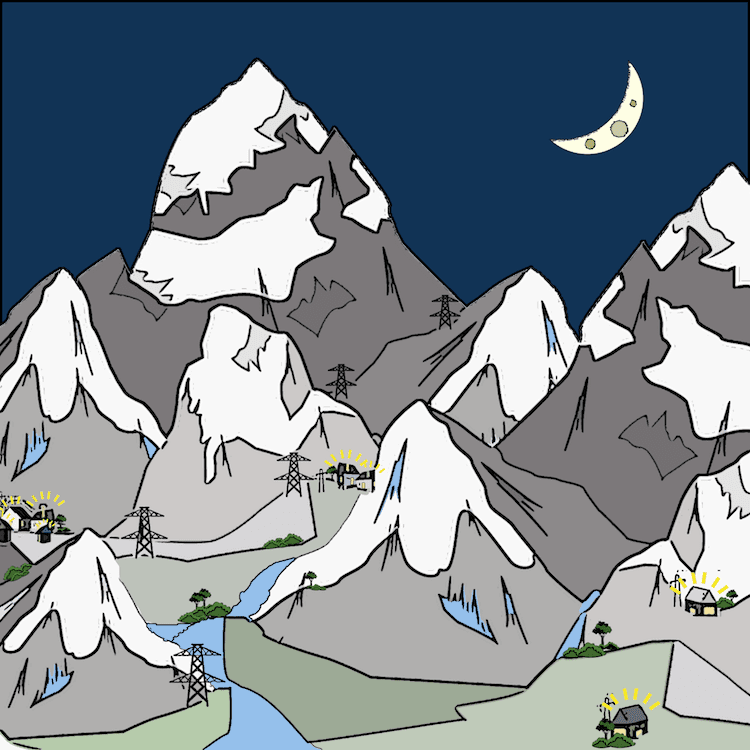 Researchers are investigating a method of creating power from fast moving streams in Nepal. Sometimes these micro-hydro minigrids work and sometimes they don’t and the researchers want to know why.

As Subhrendu Pattanayak and a group of researchers from Duke University navigate narrow catwalks high into the Annapurna mountain range in the Himalayas, they begin to understand first-hand the difficulties of establishing any set infrastructure in such difficult terrain.

Gone are the paved roads of Pokhara, the Nepali city where they had begun their day, or even the narrow dirt roads that had carried them deep into the mountainside.

Ahead, the whir of engines in symphony with the rushing water of a nearby stream mark an end to their journey: a tiny structure containing within it a single turbine, waist high and six feet wide. Here lay the source of electricity for an entire community.

80% of the geography of Nepal is composed of mountain ranges like Annapurna, making the big power grids that we take for granted in the developed world an impossibility in much of Nepal. For most mountain communities, living off-grid is the only option.

But rather than fight against their geography, many of these communities have discovered a way to use the mountains to their advantage, harnessing the power of the fast-flowing mountain streams for power using a system called a micro-hydro minigrid.

For many communities, these systems not only provide power for basic necessities like lighting and cooking, but also are drivers of local economies.

In other villages however, these systems are far less effective. Many don’t produce enough electricity for the community, or sometimes none at all.

It is for this reason that the team of Duke researchers find themselves in the Himalayas: to find out why some work and some don’t, and to see if this small but beautiful alternative energy source may be a viable solution for providing electricity to off-grid communities not only in Nepal but around the world.

Robyn Meeks and Subhrendu Pattanayaak’s work is funded by the Duke Energy Initiative Seed Grant Program. Both researchers are also affiliated with the Duke Energy Access Project an exciting initiative that takes an interdisciplinary approach to developing sustainable, modern energy solutions around the world.

For their work in Nepal, Robin and Subhrendu are collaborating with the Alternative Energy Promotion Centre which is a part of the Government of Nepal in their Ministry of Energy, Water Resources, and Irrigation.

This is the third of a four-part series on understanding and dealing with a changing climate.