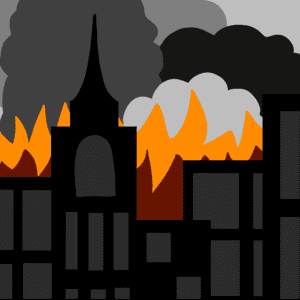 Throughout the nation’s history, time and again, promising signs of African American progress have been shattered by acts of violence serving the interests of white supremacy. The extent of that violence is widespread and ongoing.  From lynchings to the decimation of entire communities in Colfax (1873) and Coushatta, Louisiana (1874), in Wilmington, North Carolina (1898) and Atlanta, Georgia (1906), Elaine, Arkansas and Chicago, Illinois (1919), and in Ocoee, Florida (1920) and the Greenwood District in Tulsa, Oklahoma (1921), to name only a few –white mob savagery was extensive  and instrumental, with deadly and far-reaching consequences.

The Ways & Means podcast series “The Arc of Justice – From Here to Equality” is inspired by the research of economist William A. “Sandy” Darity Jr. He is the Samuel DuBois Cook Distinguished Professor of Public Policy at Duke University’s Sanford School of Public Policy. With folklorist and arts consultant A. Kirsten Mullen, he wrote the award-winning book “From Here to Equality: Reparations for Black Americans in the 21st Century.”

Theme music by David Schulman. Original music for this episode was produced by youth in Durham, N.C., in collaboration with BlackSpace and Only US. The series features the work of King Shaun, Lil Monsta, Jamm, Areon Rem, Zone, The Beast and Pierce Freelon.

Additional original music for this episode was produced by Solomon Fox, appearing courtesy of Forging The Musical Future [FTMF Talent].

“The Arc of Justice: From Here to Equality” is produced in partnership with North Carolina Public Radio WUNC. It is made possible through support from the Duke Office for Faculty Advancement thanks to funding from The Duke Endowment.