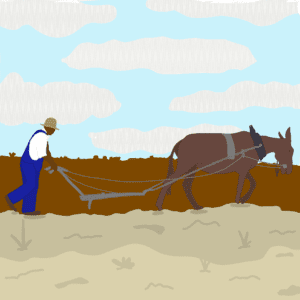 The promise of “40 acres and a mule” officially was made in 1865. The U.S. government decided that newly freed African Americans should have a plot of land to call their own. Three years earlier, when 90% of African Americans still were enslaved, the federal government enacted the Homestead Act and started offering free 160 acre plots of land to settlers, mostly white Americans.

A tale of two promises made by the government – one kept, one broken. What happened, and what does this have to do with the existing wealth gap between African Americans and white Americans? Find out in this episode.

The Ways & Means podcast series “The Arc of Justice – From Here to Equality” is inspired by the research of the economist William A. “Sandy” Darity Jr. Darity is the Samuel DuBois Cook Distinguished Professor of Public Policy at the Sanford School of Public Policy at Duke University. He has written an award-winning book with the folklorist and arts consultant A. Kirsten Mullen, From Here to Equality: Reparations for Black Americans in the 21st Century.

Sanford School @ Duke · This Land is My Land

Theme music by David Schulman. Original music for this episode was produced by youth in Durham, North Carolina in collaboration with Blackspace and Only Us, featuring music from King Shaun, Areon, Zone and Jamm. Additional original music by Solomon Fox, appearing courtesy of Forging The Musical Future [FTMF Talent].

Additional music from the National Jukebox – Library of Congress

Thanks to the owners and staff of Rose Hill Estate, Jennifer Mueller, Apryl Williams and Trina Williams-Shanks.

The Arc of Justice – From Here to Equality is a series of Ways & Means produced in partnership with North Carolina Public Radio WUNC. It is made possible through support from the Duke Office for Faculty Advancement thanks to funding from The Duke Endowment.